This is the story of how my girlfriend and I lost over 50 pounds in 6 months using myfitnesspal.

I’ve always been an overweight obese “husky” guy, before I was even a teenager. Over the years this only got worse, as more and more weight would slowly be piled on. I grew up with very unhealthy habits. Fast food every single day, very little exercise except occasional walks, being a couch potato, and always drinking soda.

Since moving the Portland, Oregon, my girlfriend and I, started changing our ways. We started cooking at home most nights of the week. We started walking to work; eventually leading to walking everyday — rain or shine. We adopted vegetarian / vegan diets, and worked to avoid processed foods as much as possible.

After all the lifestyle changes, I was still frustrated with being fat, and decided to try tracking everything I ate. I read about a study that said, people who track their weight are more likely to keep the weight off. 1 Being the tech guy that I am, I of course went online to find an app to do this. I stumbled upon the web app called myfitnesspal. It’s a great free app that lets you log all the food and drinks you put in your mouth, along with all exercise you do. You can do this online or with their handy mobile app.

I ended up using myfitnesspal (MTP) for a little while and gave up. I stopped using the app because I simply got lazy and kept going way over my daily goals. I did however managed to track my weight for many months on end. It was interesting to see my weight fluctuate over the year after the changes I started to make in my life. Only to see it go back up!

After a months of not taking things serious, a month long vacation of eating like shit on the road; my girlfriend and I decided it’s time to take weight loss serious. We started tracking everything we ate. We logged in every single day, and religiously tracked everything, and forced ourselves to do it every single day. Something special happened after 30 days of doing this. It became habit.

Along with tracking everything, we started exercising more — hikes, walking, and even started going down stairs to our building workout room! It was magic, how easier it was when I had someone supporting me and working toward the same goal. I didn’t just give up after a few weeks. Eventually, I realized missing a day or not doing well one week didn’t matter. You just keep going at and eventually you’ll lose the weight.

After 6 months of religiously using MTP we have officially lost 50 lbs between the two of us! My girlfriend is basically at her goal now, as of this writing less than 1lb away. I however, am only halfway to my goal. It’s a new year, and the holidays have come and gone. I’m afraid to admit, I didn’t do very well during the holidays, but I’m ready to get back in my routine and keep doing this.

According to BMI calculators online, I am no longer considered obese, just overweight! This is awesome, as I’m down to a weight I haven’t been to in many years. Still, I’m as tired of being overweight as I used to be as tired of being obese. I’m done with it, and more than ready, to move on to the next phase.

Next post, I’ll go into the techniques and hacks we use to more easily use https://myfitnesspal.com/.

Before and after pic: 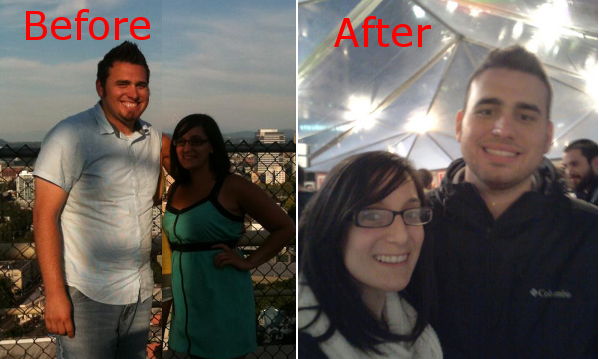