Anyone who knows me well, knows I’m a very goal oriented person. When I set my mind to something I do not give up until I’ve completed that goal. This is why I once went on a road trip across North America for a month straight. This is why I went to Hawaii for two straight weeks. This is why I’m currently living and traveling abroad. I don’t seem to ever stop or give up.

Method to My Madness

For the last several years, around the beginning of the year, I write down 10-12 goals I have for that entire year. These are not just “New Year resolutions”. These are very personal goals I intend to work on for the year or years to come. About every month or so, throughout the year, I check back at this doc store in evernote, and re-read them. To remind myself what I should be working towards. I often look back at previous years goals as well. What’s shocking to me, is how much I actually work on all the goals listed. Also I have several goals spanning multiple years, where I’m still working on them! Dedication or failure to accomplish the goal?

After working on the same goals for a few years, I think it’s clear this isn’t good enough. I often try to tackle many goals at the same time. Which I then, end up achieving nothing! Everyone should know by now, multitasking kills productivity. Having 10 random goals I’m simultaneously working on just isn’t all that effective.

When you set a goal for yourself and accomplish it, you end up just setting the next goal further and further. It’s like winning a long distance race, then jumping back into the race with a longer distance. At the end of the day you’re still not happy and you set yet more goals for yourself. And to what end?

Despite working on so many goals all the time, I really have accomplished a lot. Still, I often feel like I haven’t accomplished enough. I’m not even 30 years old yet, but I’ve accomplished many of my life long goals already! I don’t think I’ll ever be satisfied. Even if I do eventually hit my long term, truly large goals.

Take this scenario. You have a goal to lose 50 lbs. You work hard for a year, changing your diet, exercising, and drop all those pounds. Then you look in the mirror and think, wow I still don’t look great. I want to drop down even further, another 20 lbs! You cut even further and work even harder. Then you hit that goal. Next you want to get bigger muscles. You hit the gym harder and harder. Each time you just set the goal and bar higher. At what point will it be good enough?

Instead of setting new goals every year and feeling bad when I don’t accomplish some of them, I’m going to work on setting new habits. Yes habits. Habits that will help me accomplish what I want in life. See, not setting goals doesn’t mean I don’t want to improve my life or accomplish anything ever again. Far from it! Instead I want to build daily and weekly routines that will just automatically help me achieve these things.

For example, instead of just having an arbitrary weight I want to be at one day (180 lbs). I’m focusing on building one new healthy habit at a time. First, log every break fast and lunch into myfitnesspal. A few weeks later, once that is habit, I’ll start to log dinner and all drinks. A few weeks later, I’ll start to add in going to the gym after language school. After that, I’ll add yoga, going to salsa lessons, etc. Something I’ll enjoy doing, that will just lead me to slowly losing weight. Habits that will help me have life long health. Not just hitting a goal one time. I could hit my goal of 180 lbs and then start eating like crap again, since who cares, goal over. I didn’t build habits that will stick and keep me healthy.

Habits are something we use all day long through out life. For example, getting up in the morning. Personally, I wake up. Go to the bathroom. Floss (healthy habit I started years ago!). Brush my teeth. Shave. Jump into the shower. Get dressed. Pick up my keys and wallet that are in the same place every day. Then leave. I don’t ever even think about these things. I don’t try to remember to floss or put on sun screen before I go. (new habit) I just mindlessly do it because it’s habit. But I’m doing two healthy things that are important to me and my healthy. Flossing and putting on sun screen everyday. 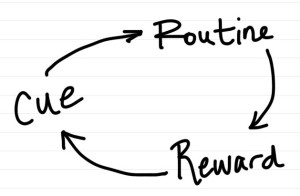 If you want to create a new healthy habit because you really want to lose weight and be healthy, for example. Don’t do what I’ve done and try to build 4 new habits at once – Log all my food. Exercise every day. Eat a salad every day. You will fail. Instead you need to focus on just one single habit at a time. You’ll need three things: cue, routine, and a reward. This is called the habit loop. (see image above)

The cue needs to be something that you’ll also do or see. For example, logging your food into an app everyday. The cue would be finishing up your meal and putting dishes away. That should cue you to log your food. After logging your food you should see your calories you have left. Congratulate yourself in your head. You’re being super healthy and you’re more than twice as likely to lose weight and keep it off. Studies keep showing this. [1][2] Just do this for 2-3 weeks and it will be come habit. You will eventually achieve your goal if you build in the habits. Just look at me, I did this before! See here how I lost over 50 lbs doing this!

I’m not going to keep setting goals for myself and half haphazardly try to accomplish them all. Instead, I’m coming up with weekly new habits I need to build into my life to eventually just do what it is, I want to do or accomplish. To be honest, I’ll just be happier and less stressed out. I’ll monotask and focus on just one thing at a time. I’ll eventually end up being successful and I won’t even be thinking about it half the time. (Do you think about brushing your teeth when you do it? Or obsess about needing to brush your teeth all the time?) It still take a lot of hard work to build a new habit and get rid of old ones. One thing is for sure, just writing down what you want won’t get you it. You need complete steps on how to get there. One habit at a time.

For more in-depth info on habits. I highly recommend this book:

The Power of Habit: Why We Do What We Do in Life and Business